Why do so many mothers have difficulty with breastfeeding?  A large part of the reason is that though we tend to believe that breastfeeding should be natural, most people, particularly most obstetricians, have not yet understood that the “unnatural” way women give birth in much of the world, makes breastfeeding difficult and sometimes impossible.

Please do not get on my case because I am a man and never gave birth.  I am not trying to shame women for not having a natural birth in middle of a forest attended by a 90 year old midwife.  But it is important to understand how what we do to mothers during labour and birth does influence how successful breastfeeding will be.  And yes, I also know that many women gave birth with all the interventions possible including a caesarean section and still were able to breastfeed successfully.

Here are just a few of the ways that giving birth in affluent, and not so affluent, societies interferes with breastfeeding.

Epidurals for pain during labour and birth

When a woman is in labour and receiving an epidural, she receives a large amount of fluid by intravenous infusion.  The idea is that epidurals may result in a significant drop in the mother’s blood pressure and that is not a good thing.  But why do the mothers receive such a large amount of fluid?  Three or more litres in 24 hours is not unusual. I have spoken with obstetricians who agree that this quantity of intravenous fluid is completely unnecessary.

When the mother gets such large quantities of fluid, so does the baby and at least a couple of studies have shown that the more fluid the mother receives, the more likely the baby is to lose 10% of his birth weight. And in many hospitals 10% decrease from birth weight automatically means supplementation, usually by bottle.  But partly because of the intravenous fluids the mother and baby received, evaluating the adequacy of breastfeeding by % weight loss is absurd and leads only to bad practices with regard to breastfeeding.

This study Chantry CJ, Nommsen-Rivers LA, Peerson JM, et al.Excess weight loss in first-born breastfed newborns relates to maternal intrapartum fluid balance Pediatrics 2011;127:e171-e179 showed that a greater weight loss in the first few days (more than 10%) was significantly related to the amount of fluids the mother received during labour and birth. This study Noel-Weiss J et al. Iatrogenic newborn weight loss: knowledge translation using a study protocol for your maternity setting International Breastfeeding Journal 2011;6:10 showed the same thing and the authors emphasized the importance of clinical evaluation of breastfeeding rather than depending only on % weight loss to decide if breastfeeding was going well.

But there is more.  When a mother has received large amounts of fluids during labour and birth and after the birth as well, she often retains a lot of that fluid for several days. Not only are her hands and feet often swollen, but also her nipples and areolas will be swollen as well, making it difficult for the baby to latch on well (or at all) and get milk from the breast.  And besides the baby not getting milk well, a poor latch often leads to sore nipples.

Overall, the use of large amounts of intravenous fluids during labour, birth and after the birth often results in early introduction of bottles to babies, early supplementation with formula, and separation of mother and baby (many babies are taken to special care for more than 10% weight loss).  Overall, this the first step for many mothers and babies on the road to breastfeeding failure.

What the mother and baby need is not automatic bottles and formula which is what is done in too many hospitals, but rather, they need good help with breastfeeding from experienced, skilled nurses and lactation consultants. This includes good help with latching on  and the use of breast compression to get more milk to the baby. If the mother has swollen nipples and areolas and it is difficult to achieve a good latch, then reverse pressure softening of the nipples may help.

What the mother doesn’t need, but too often receives, is a nipple shield. 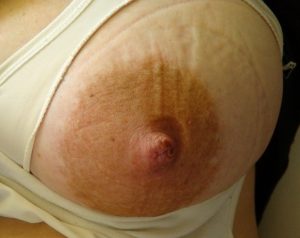 This mother has swelling of the breast, the nipple and the areola, due to retention of fluid. This makes it difficult for the baby to latch on. The result? The baby does not get milk well and the mother’s nipples are sore.

Different scales weigh differently.  We have seen two scales weigh 400 grams (14 ounces) different for the same baby weighed minutes apart. Most scales are not that far off, but we have seen two scales by the same manufacturer, the exact same model, weigh the same baby 85 grams (3 ounces) different and this is probably not unusual. 85 grams for a 3 kg (6lb 10oz) baby is almost 3% so that a baby may lose or gain 3% of his birth weight depending on which scale he was weighed on first. Note that most babies are weighed first in delivery and then, on another scale, in postpartum.

Errors in reading the scale or marking down the weight are not rare. We have documented one baby who was weighed at birth at 2.58 kg (5lb 11oz) and 5 hours later weighed 3.1 kg (6lb 13oz). Normally, babies are not weighed every 5 hours, but undoubtedly what happened was that someone looked at the baby at 5 hours of life and thought “This baby couldn’t possibly weigh only 2.58 kg”. But what if the weighs were taken the other way around? Going from 3.1 kg at birth to 2.58 kg the next day is a loss of 17%.

Drugs use during epidural anaesthesia

Anaesthetists generally will tell mothers that the drugs used during epidural anaesthesia do not affect the baby.  For those who have seen the difference between babies who were born without epidural or spinal anaesthesia and those born with such anaesthesia, there is no need for proof.  The difference between a baby who has not received any drugs from the epidural, who is alert, looking for the breast and ready to crawl to the breast, and a baby drugged by medication, who is sleepy and not interested in the breast is obvious.

But you need studies?  Here is a list of studies that shows that babies are indeed affected by the drugs used in epidural anaesthesia.

Fever in the mother

When mothers receive epidurals, the longer they have the epidural the more likely they are to get fever.

“Use of epidural analgesia during labor is strongly associated with the occurrence of maternal intrapartum fever, neonatal sepsis evaluations and neonatal antibiotic treatment”

“Women in labor with epidural analgesia experience a larger increase in temperature and more clinical fever than do women who receive other forms of analgesia.”

And what is the result of mothers having fever during the labour and birth? Antibiotics for mother and baby and frequently, transfer of the baby to the special care unit. And in some cases, no breastfeeding or breastmilk for the baby because the mother may have an infection. You can read why this is so incredibly absurd  in my article on maternal illness.

And there is more, much more

But the above issues are by far the most important.

Sorry, the comment form is closed at this time.